Saved By The Lamey

Ya know, I almost didn't have a post today.

Yeah, I know, quel dommage, right? But clicking down the list of useless pwoggie blogs today only garnered a handful of tedious, trivial, turgid and, oh, something else that begins with a 't,' posts that barely deserve comment.

And it's only going to get worse. Now that we're almost a year away from the Most Important Election Ever In The History of Elections Ever, our mealy-mouthed gaggle of pwoggies will become increasingly obessed with every state, district, county, city, township, village, hamlet, doghouse, henhouse and shithouse their corporate-owned masters control. Lemme tell ya, it's either feast or famine with the pwoggie blogs.

Now, Lamey has been on a tear recently, making excuses for his DNC masters and betters and hoping that someone will actually believe his weakass drivel. But this latest in the series is a prize-winning grand-bull-moose Excuse-A-Thon with Jerry Lewis and the June Taylor Dancers and special guest appearance by Don Ho!

This one's got it all! There's the "duped democrats" excuse. (They weren't.) The "cowardly democrats" excuse. (They aren't.) (Idiot.) The "mean republicans" excuse. (Sticks 'n Stones.) The "It's the Media's fault" excuse. (See: The Conservatard Excuses Playbook, Ch. 6, 7 &11) The "Obama's secret plan" myth. (He doesn't.) The "health care reform" myth. (It isn't.) and he even dusts off that hoary old "Democrats are the party of the people" myth that no one has beleived since the Civil-Fucking-War.

Lamey's blog may have to be designated a superfund site if he keeps on storing that much toxic whitewash in one place. Besides, packing rationalization that densely may contravene several arms treaties and the Geneva Convention. I personally haven't seen apologia piled that high since Jimmy the Greek got booted off of "NFL Today" and that was in the dark pre-internet days when dinosaurs thundered across the plains in their thousands and buffalo ruled the earth!

Well, you see what I'm driving at. There's no possible way I can not award Lamey something for his herculean efforts at justifying his master's criminal acts. And so, by the power invested in me by Dirty Greenies everywhere, I hearby award The Lame Pundit our new monthy award:

The Purple Finger of Contempt!* 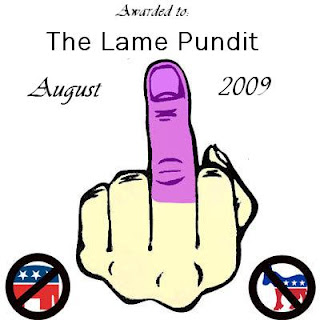 Congratulations, Lamey. You deserve every last pixel of it.

(* Inspiration for this award properly goes to ace commenter Al Schumann. This was your fault, pal!)
Posted by AlanSmithee at 2:03 PM