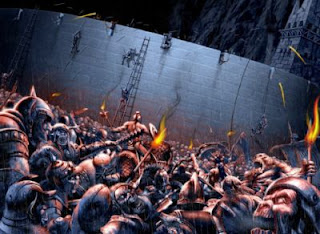 (An artist's depiction of what pwoggies imagine townhall meetings are like.)

There's a lot of pwoggie prestige on the line with God-Emperor Obama's craptastic giveaway to the health insurance companies. If the fauxgressive elite don't get something they can pass off as "reform" to their legions of on-line do-nothings, why, they might just...just...stamp their little feet! Or something!

The sages at Diggly Wiggly are exercised over the fact that their "team's" bullshit astroturf organizations aren't doing enough to combat the repub's bullshit astroturf organizations. Obot Left is blowing the trumpets in a call to man the walls against hoards of insane rightwing orcs birthers charging waddling to attack Helm's Deep Holy Obama's Holy Heathcare Reform Fortress and Motor Lounge. Even Lamey, the ne plus ultra of boring Internet pundit-wannabes, is spinning madly, flinging charges of TERRORISM against his mirror images on the right and calling for "counter insurgency" to be led by his fellow personality cultists.

All this thud and blunder is over a bill that in other countries would be characterized as a legislative crime. But please, gentle reader, don't either side in on that little fact. It might spoil the spectacle of red faced Cheeto-stuffed couch potatoes screaming incoherently at each other in city council chambers all across the country and foil my plan to see tickets at the door. (It'll be a gold mine, I tell ya! A gold mine!)
Posted by AlanSmithee at 8:16 AM