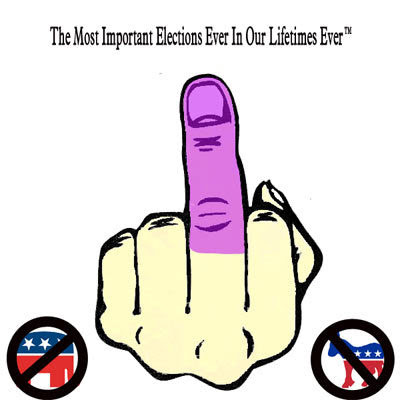 Normally I don't bother with the A-list pwogs. Mostly because I think that pundits who get paid to bloviate are less interesting than the amateur wannabes like Diggly or Big Turd Demotard. The way I figure it, since they're number two, the B-listers really have to ramp up teh crazy to get noticed. Nor do I have much use for pwoggie "news" sites like Alternet or Truthdig which, absent Bush, are largely useless appendages of the DP.

So I was somewhat surprised to stumble across an article by Chris Hedges, elite pwoggie columnist for La Nation and author of The War of Force that Means Somthing or what-the-fuck-ever. Buried in the bowels of Truthdig, it's a belated, half-assed apology on behalf of himself and his fellow partisan pundits, titled "Nader Was Right: Liberals Are Going Nowhere With Obama."

I won't bore you with the details. And I certainly can't speak on behalf of Ralph Nader or Cynthia McKinney or (most of, anyway) the Green Party. All I can really do is offer my own humble reaction to Hedges semi-hemi-demi-attempt at fence mending. Ahem:

No, really. Ram it right up there where the sun don't shine, Hedges. We've had to listen to your supercilious, mealy-mouthed lesser-evil shit since your corporate-built robot Gore fucked up and lost the 2000 election to a Texas halfwit. For fucking years we've been hearing nothing but: "McKinney is a Traitor!" and "STFU you dirty greenie hippies!" from you sneering, gutless whining, puling, little turds and now...now you want to make nicey-nice?

Really? Now that you dipshits have fucked up once again, suddenly we're supposed to forget the decade long rain of abuse from you assholes? You think because I recycle and use public transportation and shop locally and such, because of that I'm going to be nice and polite and reasonable and say "Oh, that's OK, Chris. I'll ignore your DECADE OF SHIT BECAUSE YOUR HEART WAS IN THE RIGHT PLACE! COME ON IN AND MAKE YOURSELF AT HOME AND RAPE MY SISTER, CHRIS!"

What do you think I am, Chris? A democrat?
Posted by AlanSmithee at 6:39 AM