Word must have come down the pipe to 'make the health care debate personal' or some such, since the pwog blogs are being flooded with posts about going to the doctor's office for a hang nail or colon cancer or whatever. The DP is just giving their yippy-yappy pwoggie puppies some bullshit make work over the fall break, but I really can't be bothered with it. Life is too short to bother with shitty high school essays written by ass-kissing pwogs. 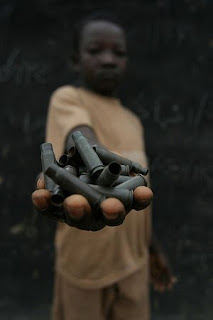 Much funnier is the utter obliviousness with which our pwoggie doggies treat their mistress Hillary on her little jaunt to look after our business interests in DR Congo. As usual, our demotard cheerleaders are fucking clueless about our foreign policy in the region. But that doesn't stop them from drooling and blubbering over empty gestures from and imagined slights to bloody handed war mongering DLC fucks like Hillary "Bombs Away!" Clinton.

Truthfully, your average pwog doesn't really give a shit about the DRC so long as the flow of coltan for his/her electronic gadgets is uninterrupted. That's why we've been fueling both sides (sometimes all sides) of with hundreds of tons of arms shipments since the Cold War.

The ongoing civil war in the Democratic Republic of the Congo (formerly Zaire) is a prime example of the devastating legacy of U.S. arms sales policy on Africa. The U.S. prolonged the rule of Zairian dictator Mobutu Sese Soko by providing more than $300 million in weapons and $100 million in military training. Mobutu used his U.S.-supplied arsenal to repress his own people and plunder his nation’s economy for three decades, until his brutal regime was overthrown by Laurent Kabila’s forces in 1997. When Kabila took power, the Clinton administration quickly offered military support by developing a plan for new training operations with the armed forces. 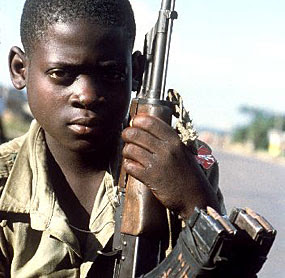 Of course, things were different in the Wondrous Clinton Golden Years of Peace And Prosperity, weren't they?

In fact, the Clinton administration’s approach to Africa continues to focus on securing short-term U.S. interests in the region, maintaining a safe distance from the ongoing problems, and encouraging near-sighted, armed responses to the complex problems of democratic transition and international peacebuilding.

After Bill "Big Dick Dog" Clinton was done ignoring genocide and propping up African warlords and dictators, the Bogus POTUS King George II was only too happy to carry on the legacy of President Fuckstick, fighting every arms embargo that might affect the guns-for-minerals trade in the DRC. 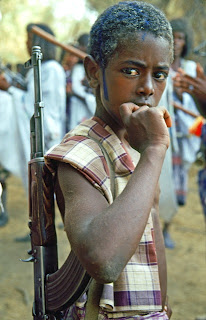 Which brings us back around to the present and our Sec State's diversion from important tasks like threatening Eritrea (for endangering our Somali puppet government, amongst other things) to go check up on our corporate interests in DR Congo. An upsurge in the horrific practice of systematic rape during US backed military operations prompted some comment from Hillary, for which she is being lauded in the pwog blogs as a model of feminist righteousness. Presumably, she's just fine with murder, theft and oppression our proxy forces commit on behalf of US interests - just so long as rape isn't involved.

And I'm sure the Emperor agrees.
Posted by AlanSmithee at 11:46 AM