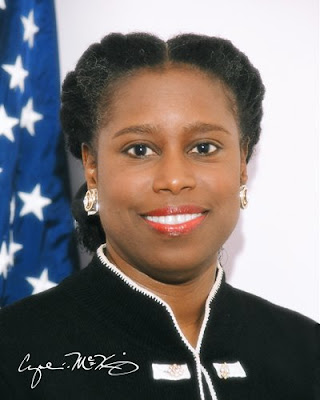 Traitor to the Democratic Party and God-Emperor Obama
The former congresswoman that pwoggies love to hate, 2008 Green Party presidential candidate Cynthia "Traitor to the Party" McKinney, is being held captive by the Israeli apartheid government. Read the particulars here, because you won't hear about it on the pwog-blogs.

(Update: The GP is calling for the release of McKinney and the 20 other hostages Israel is holding.)

(Update 2 - The Revenge: Okay, I usually don't bother with pwoggie blogs like DKo$ because, well, it's a fish barrel situation. But this bat-shit insane koswhack is truly hi-larious!)

(Update 3 - Son of Update: More about Israel's ongoing crimes at GPWatch.)
Posted by AlanSmithee at 2:38 PM