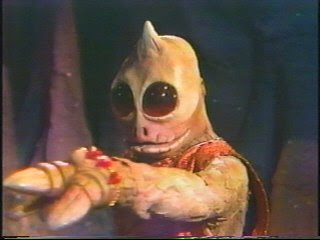 Vote For The Lesser Evil!
Hilarity ensued over at Brains Fell Out when lapdog-wannabe Mo'Betta Bowers, while crowing over some minor misfortune to befall newly minted Dem Arlen "Magic Bullet" Specter, posted in support of DLC'er Joe Sleestak Sestak. In case you don't remember this clown, (and why should you) he's the abusive, tantrum-throwing ex-desk jockey admiral who was one of the very few dems to actually win a race back in '06 (PA7) during Rahm Emanuel's largely failed campaign to pimp conservative veterans as oh-so-progressive democrats.

Like the jellyfish dressed up in a cheerleader uniform that he is, Mo'Betta gives Sleestak the lesser-evil treatment while his pwoggie-bloggie posse delivers the beat down to anyone who dares step out of line. A better look at the whole Sleestak-Specter nontroversy can be found here.
Posted by AlanSmithee at 9:13 AM