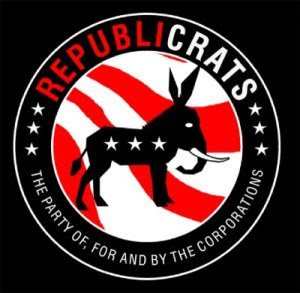 Pwogwessive gatekeepers have just started to get their between-elections groove on. How do I know? Easy-peasy-lemon-squeezy. You just have to look for the "those darn democrats better learn from such-and-so" articles they slop out onto their blogs to give themselves a thin, sticky veneer of independence. (Which begs the question: "Or what, Obot?") A veneer easily scrubbed off when it's time to turn back into lip-frothing, pants-pissing, koolaid-spewing, Nader-bashing dembots.

The latest issue to produce do-nothing gabble like this and this is the Democorporate Party's non-healthcare-reform healthcare reform bill. It's a coarse ground sausage of industry appeasement and feel-good band-aids that can only be likened to real reform in the same way that a coin tossed into a wishing well can be likened to a coast-ravaging tsunami.

And speaking of chocolate-coated crap cones, very few pwoggie bloggies have been blindly stupid enough to try pimping the God-Emperor Obama's capn' trade greenwash, but Shake-A-Puddin gives it her usual halfassed try. You too can go green by burning coal and buying offsets! Plus, you can lose weight be eating ice cream! Sure you can! Prove you can't!

(Update: Mo'betta Bowers comes through in the clinch with a pollyanna-ish pundit paean to his DP master's plan to flush our future down the fucking toilet. Rah-fucking-rah, Bowwow.)
Posted by AlanSmithee at 9:23 AM