Sing Ye Praises To The God-Emperor 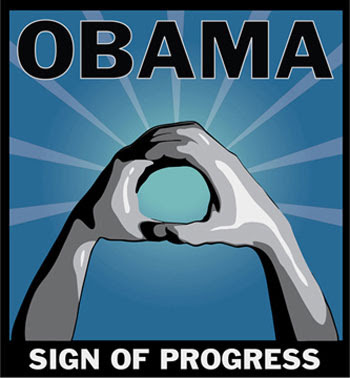 As the A-list pwog blogs frantically work to sell Emperor Obama's mega-give-away to the health insurance corporations as the greatest reform since the Magna Fucking Carta, the lesser pwoggies are busy too. Everyone according to their abilities is the rule, and no one has less ability than personality cultist and full time demotard Shake-A-Puddin. Here she's straining to keep up the glassy-eyed cult forged around their God-Emperor last year:

You can read the usual hosannahs to Shakey's wisdom in the comments, but I wouldn't recommend it. Anyone who dared disagree Shakey has long ago been purged, leaving a Whitman's variety assortment of faux-liberal shut-ins, weak minded lesser-evilists and cat picture enthusiasts.

In short, the remaining cultists are a moderately unbearable lot. I'm brought to wonder, though, if Shakey is as impressed with her Emperor's multi-ethnic approach to bombing and torture. Maybe that's what she means by Obama's "genuine commitment."
Posted by AlanSmithee at 9:44 AM