All Praise the God-Emperor! - Part Umpity-Zillion 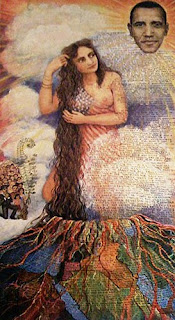 Something on the wind is making the herds of pwoggie faithful nervous. Maybe it's the bloody escalation of the Afghanistan slaughter. Or maybe they're finally sensing the long hoped for and coveted public option is going to be just another pathetic bait and switch. What ever the cause, another of the "Dare To Believe The Dream Of Hope For Change" posts has popped up, this time at courtesy of DP flack-wannabe Mike Lux at Obot Left.

As faux-liberal think pieces go, it's pretty much more of the same. First the usual "most important historical era ever in the history of ever" drivel. Then comes the booklicking; comparing God-Emperor Obama to Washington, Lincoln, FDR, Ghandi, Nelson Mandela, Saint Sebastian, Jesus, Osiris, Paul Bunyan and some guy named "Remo." And then the inevitable exhortation to Obama's glassy-eyed personality cultists to keep following Dear Leader into the glorious future where Ipods rain down on the faithful and cluster bombs rain down on brown people.

Here, as the strippers say, is the blow off:

If progressives, and regular working Americans, see Obama pick a side- our side- and really fight for it, no matter what happens over the next 3 years, we will stick with him and fight for him, too.

Who are we kidding here?

It's the job of party shills like Mike to keep up a wafer-thin pretense of independence, as if there were some instance, however distantly theoretical, in which they might not support their God-Emperor. But only those with the metal capacity of a mildly retarded clam actually believes it.

(Update: Chris BowWow, the annoying-little-yappy-dog-that-everyone-wishes-would-dash-out-into-the street-and-get-run-over of the Democrat Party, joins in the mindless worship with a paean to the God-Emperor's $700 Billion Bank Giveaway. This despite Barofsky admitting that all of the money won't be payed back. Hosanna Superstar!)
Posted by AlanSmithee at 11:57 AM