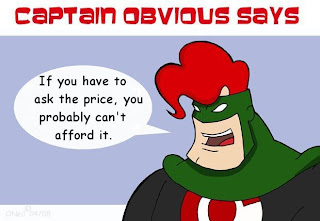 Over at Obot Left, pwoggie celeb Ian "I'm not a Democrat I just shill for them." Welsh is wondering why progressives don't play the Washington money game:

"I don't know why we don't have really effective fund-raising which is sufficient to do effective lobbying."

I dunno why ol' Ian can't figure this out. He's not a complete idiot. Maybe he still believes the good government bullshit he was taught in Civics 101. Maybe he's Canadian or something. Maybe he doesn't have access to Wikipedia or any resources having to do with income distribution in the United States. A la:

While income increased among all demographics (in the 20th century), the upper-most earners saw substantially larger increases. According to economist Janet Yellen "the growth [in real income] was heavily concentrated at the very tip of the top, that is, the top 1 percent."

Pwoggies like to believe that the pennies they turn in to ActBlue or MoveOn or some other DP front group gives them real clout within the party. The truth is, of course, that pwoggies couldn't afford the money it takes to influence a congressional page, much less a congressperson.
Posted by AlanSmithee at 11:34 AM