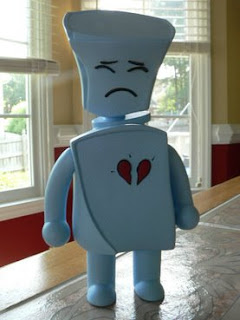 Having watched Dear Leader bail out the banksters to the tune of several ba-jillion dollars, ramp up the slaughter in Afghanistan, fudge his promised withdrawl from Iraq, pass a truly craptastic energy bill written by his clean coal & nuke buddies, and continue much of Bush/Cheney's odious legecy from torture to domestic surveillance, our faugressive friends of the Demotard left are beginning to show a wee bit of the strain that comes with ear-bleedingly massive cognitive dissonance.

The usual excuses have all been exhausted. Republicans, Bloooo Dogs, The Media, sunspots, "centrists," biorythms, Cynthia McKinney, halitosis, SPECTRE, bad vibes and the Curse of the Bambino have all been deployed in a frantic whirl of rationalization. Only pwogs as oblivious as Shake-A-Puddin are still posting pictures of Dear Leader to coo and swoon over. (Nausea alert!) And only pwogs as braindead as Pwogman are still trying to rally the troops by pushing "Mo'Betta Dems." (Fuck, even "Mo'Betta" Bowers isn't clueless enough to be pushing that stale Mo'Betta meme right now.)

Now that all their go-to rationalizations are laying around stinking like three day old fish, what's a progressive to do? Finally put down the Cheetos and Dr. Pepper, get out of the basement and start the long, arduous work of organizing real in-the-flesh people?